Nothing sparks a bigger riot than Politics.

UMNO Youth member, Wan Muhammad Azri Wan Deris aka Papagomo, met a 20-men thick roadblock in Kota Kinabalu International Airport yesterday at 7.30PM as he and his "gang" were planning on making a trip to Kuala Lumpur.

A fight broke out after Papagomo had tore a picture of Sabah's Chief Minister, Mohd Shafie Apdal, 3 days ago...and that did not sit well with a lot of the locals.

So like most people in Malaysia, no one resolves anything with words anymore -- just pure fist fights.

It was reported that these unhappy lot were from the Bajau organisation Pertubuhan Permuafakatan Perpaduan Peranakan Suluk Bajau Negeri Sabah, that is led by Mohd Akjan Datu Ali Muhammad.

Someone from the group had yelled “anjing kurap” towards the Papagomo and of course, that would spark anger in anyone.

Papagomo was held back by bystanders as he attempted to fight back. 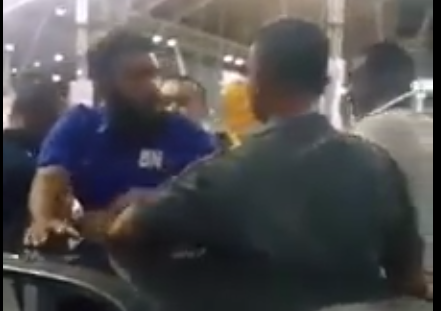 As the police rushed to the scene, Papagomo was then seen rushing to the departure gate.

The angry mob were then heard singing “Terima Kasih Sabah” as Papamogo and his group got past the gate.

Several Warisan members had also demanded that Papagomo be banned from entering Sabah.